The “Avenue of Flags” is a presentation of over 700 interment flags on flagstaffs that line the lanes in this National Cemetery. The interment flags are donated by families whose relatives were entitled to military honors at their funeral and the memorial flag (the interment/casket flag) was then donated by the family to this National Cemetery for use on the Avenue of Flags. The presentation is set up the first Saturday in May and is taken down one or two weekends after Veterans Day in November. This program enlists the aid of over 500 volunteers to maintain the integrity of the presentation. Volunteer inspection teams inspect the flags of the presentation every weekend during the six and a half months the flags fly and when an interment flag is found to be unserviceable, it is removed from the flagstaff and a new flag is put up in its place. 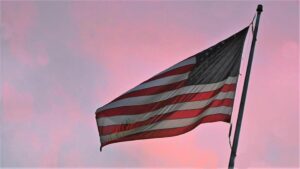 During the tenures of the National Cemetery Directors prior to 2008 at the Indiantown Gap National Cemetery, the Avenue of Flag display consisted of 175 interment flags that were placed on staffs on either side of the main driveway from the public highway to in front of the Administration Building.

The display was only presented over a two week span of the Memorial Day and Veteran’s Day holiday.  The display was set-up and then taken down by the grounds crew of the National Cemetery.

Two members of the Bob Smith Detachment #784, Marine Corps League, Inc., from Hummelstown, PA, in 2006 convinced then Cemetery Director Leon Murphy to allow members of the Detachment to provide a staff of volunteers to set-up and take-down the display for those two holidays during the year so as to relieve the grounds crew of that task.  They also asked to be allowed to set-up the display at a few other holidays.  Director Murphy agreed to some but not all the holidays requested.

After Director Murphy retired in 2008, the new Cemetery Director, James Metcalfe, II, was approached by the two Detachment members.  Through a series of discussions with him, Director Metcalfe granted the Detachment volunteers permission to fly the flags on more holidays and to do the work on Saturdays instead of during the week so as not to disrupt any funeral services being conducted and also for the convenience of the numerous volunteers who were only available on weekends.

In the late fall of 2009, permission was sought and granted to allow the display to be presented the following spring on the first Saturday in May 2010 continuously until a weekend or two after Veteran’s Day (November).  The permission was granted on condition that teams of volunteers inspect the condition of the flags every weekend – without fail – or the display would be taken down.

The 80 members of the Avenue of Flags Volunteer Staff (at that time), working as teams, set up the 525 USA interment flags, the 50 State and Commonwealth flags, the 5 Territorial flags and the District of Columbia flag on the first Saturday of May, now commonly referred to as “FLAGS UP” day.  Then, every weekend an Inspection Team went to the National Cemetery on their assigned weekend to inspect all the flags of the display, replacing faded, worn or tattered flags with other flags that had also been donated.

The May to November presentation was successfully managed that first year and the Cemetery Director granted permission to repeat the process again in 2011 and it has been executed successfully every year since to date – without fail.  The volunteer membership has grown to over 340 registered volunteers and, as it always happens, dozens more show up each year who prefer not to register but want to help with this honorable and memorable task.

This patriotic display of our nation’s colors reverently honors those who have been laid to rest in the hallowed grounds of Indiantown Gap National Cemetery and in other cemeteries.  This display has been faithfully maintained by a dedicated group of volunteers of the Avenue of Flags Committee of the Indiantown Gap National Cemetery Memorial Council.  The volunteers and members of the Memorial Council seek no reward save their own personal satisfaction that they were part of a program that honors the fallen service men and service women who are now at eternal rest here or at other cemeteries.

When this project first started, the volunteers were mostly from the Bob Smith Detachment, Marine Corps League, Inc.  As time has gone by, interest from other veteran service organizations and organizations of similar interest has increased and now the Avenue of Flags Volunteers represent a large cross-sectioning of dedicated members from other Marine Corps League Detachments, the Navy Club USA, VFW Posts, American Legion Posts, Purple Heart Chapters, DAV Chapters, motorcycle touring clubs, Boy and Girl Scout Troops, Civil Air Patrol Squadrons, JROTC and NJROTC units, the Vietnam Veterans of America, Sea Scouts, the Young Marines and even employees of the Post Office.  There have also been several military retiree organizations that have stepped up to serve once again as well as many individual youth and adult volunteers who are not associated with any of the organized groups.

The United States Flags that are on display on the Avenue of Flags are the flags that were presented to the family at the time of the funeral service of their deceased service-connected family member.  Patrons desiring to donate a flag may donate their deceased family member’s 5 foot by 9 1/2 foot casket flag.  It should be noted, however, nylon flags that are the same size and flags of different sizes, or flags that are otherwise “store-bought”, will not be flown on the Avenue of Flags.  The Avenue of Flags presentation is reserved for flags that were presented to honor and memorialize a deceased active duty, reservist or veteran of the armed forces who otherwise met the requirements for a military honors funeral.

Patrons not having a flag to donate may make a financial donation to the Memorial Council to help defray the costs associated with the presentation of the Avenue of Flags.  The Memorial Council, not the National Cemetery, purchases the State and Territorial flags used on the display at an annual cost of approximately $1,500.00 for a full set of 56 flags.  The full set is replaced each spring.  The aluminum poles and of the hardware needed to build the individual interment flag staffs used to display the flags cost about $50.00 for each pole.  These poles are occasionally replaced when visitors accidentally hit them with their cars or violent winds pull the flag and pole over to the ground.  Also, because of recent renovations to the National Cemetery, new poles are needed to fill in along the new lanes added through new sections of the National Cemetery.

The Memorial Council receives no funding from the U.S. Department of Veteran’s Affairs or any other branch of the federal government towards the purchase of these flags or staffs and relies on the generosity of the patrons who visit the cemetery or attend the Memorial Day Program, the Veteran’s Day Program or the Candlelight Service Program in December and others desiring to fund the veteran recognition activities of the Memorial Council.

If you are interested in volunteering for this project, there are only a few “rules” that need be followed.  Three of the most important are

Wearing the unit’s uniform and work gloves are encouraged.  Weapons of any kind, (licensed to carry or not) are prohibited on this Federal Property.  Pets are not allowed.  Service animals are not pets.

For complete information about the “AVENUE OF FLAGS” project, donating interment flags to the Avenue, helping as a volunteer on the Avenue, please contact the Avenue of Flags Chairman, Bob Hauser:

EMAIL US FOR MORE INFORMATION ON VOLUNTEERING!

There Are Two Ways You Can Make A Donation: 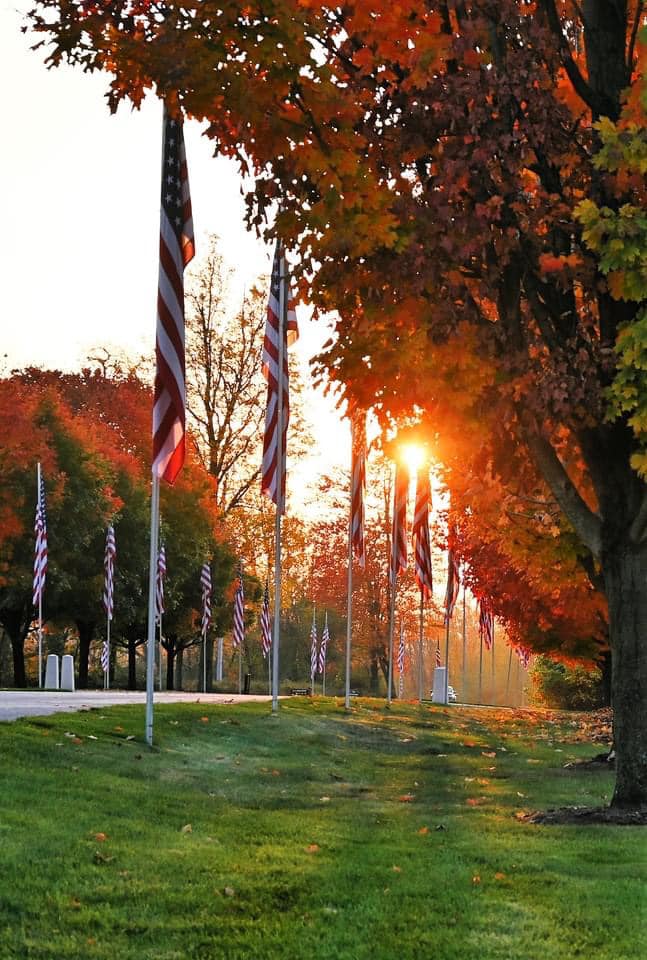 The Memorial Day Program is held on the Sunday immediately before Memorial Day at 2 p.m. at the Pennsylvania Veterans Memorial in the National Cemetery.  Traditionally, the theme of the Memorial Service is to honor the lives of the military who died in battle during hostile actions or later as a result injuries suffered during those hostilities.  This program is open to the public and there is no charge for parking, shuttle bus service, admission or any hand-outs given to the patrons.  A guest speaker from the co-hosting VSO (Veterans Service Organization) offers their oratory, a band will play a few selections of music or a choir will perform several renditions of appropriate songs and wreaths are symbolically placed memorializing those who died in the service of their country.

A Massing of the Colors may also be presented.  This Massing of Colors is a parade of US flags and organizational flags that are marched through the PA Veterans Memorial arena before and after the ceremony.  Organizations include any VSO, fraternal organizations and Scouting and other youth groups that participate in patriotic events.  Groups that are interested in being a part of the Massing of Colors are to contact the Memorial Council for more information.

The Veterans Day Program is held on the Sunday immediately before November 11th, Veterans Day, unless the 11th is a Sunday, then the program is held on that date. This program follows the same time, place and services provided as the Memorial Day Program except the theme is to honor the living veteran and the veteran who has died by causes other than military injuries. A Massing of the Colors is also presented at this event. 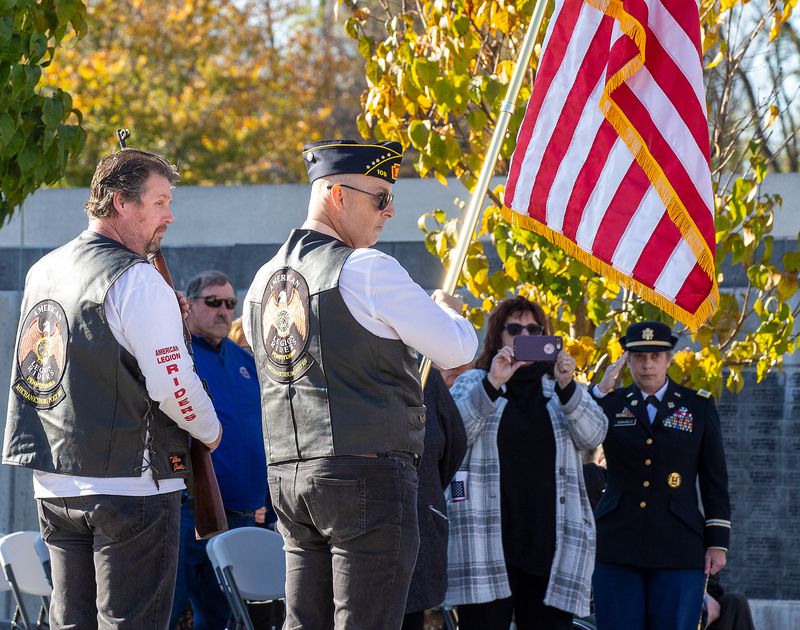 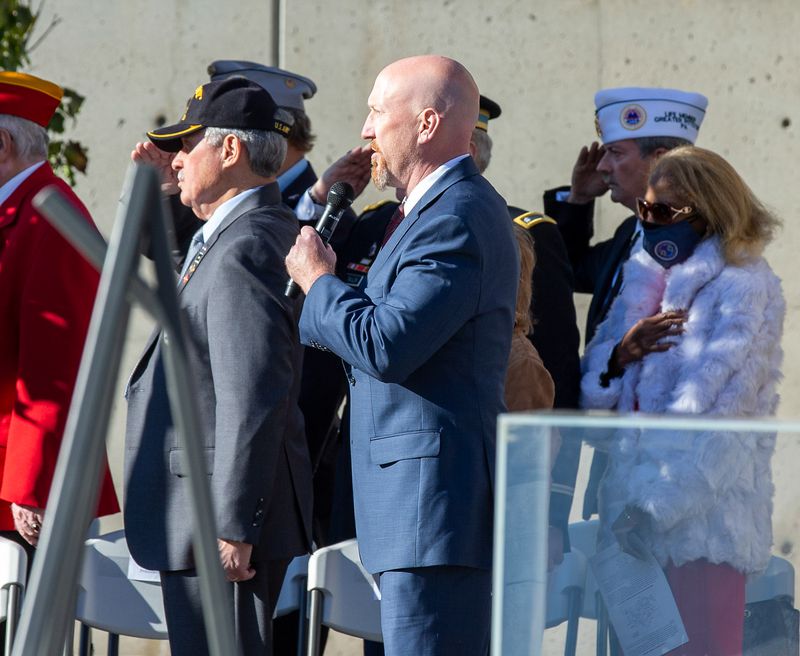 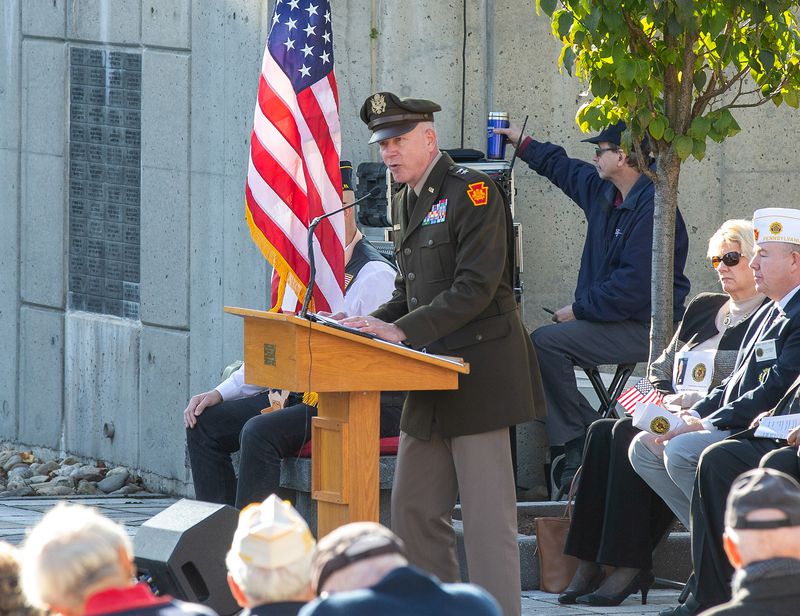 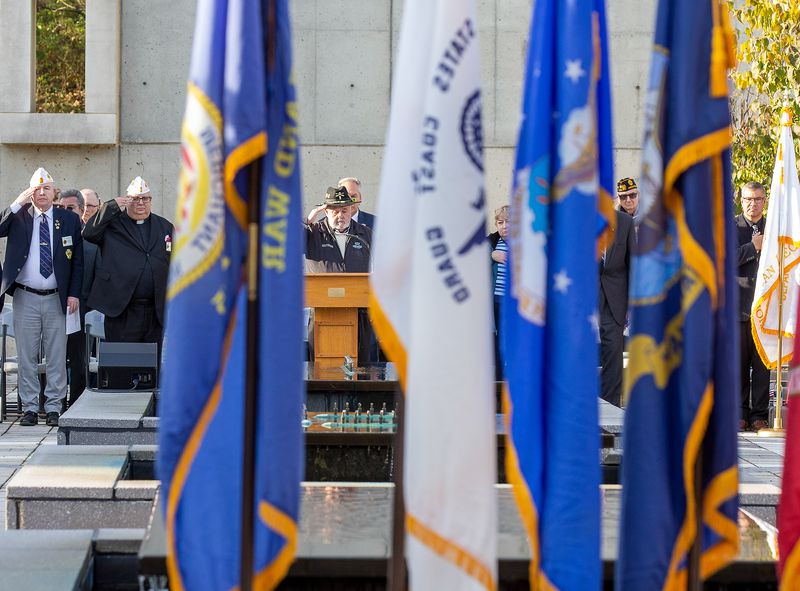 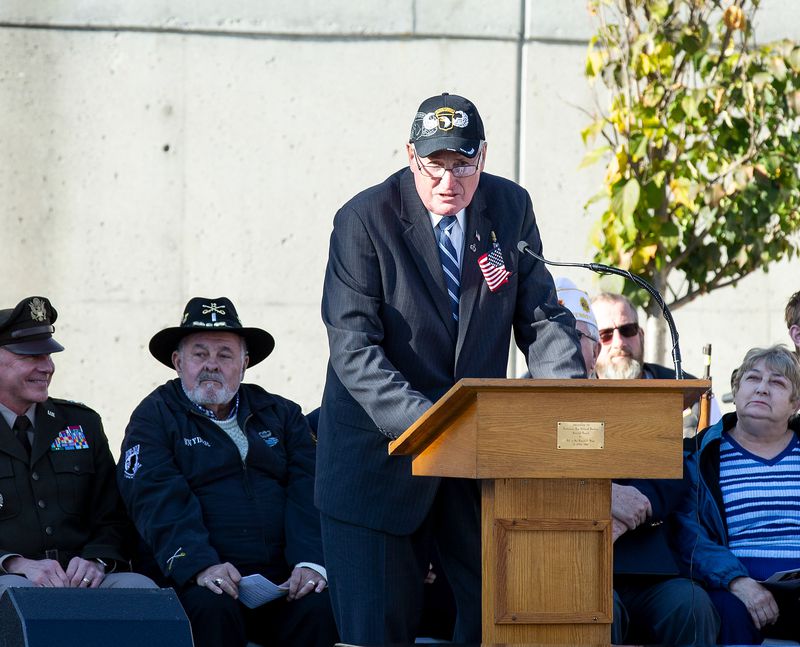 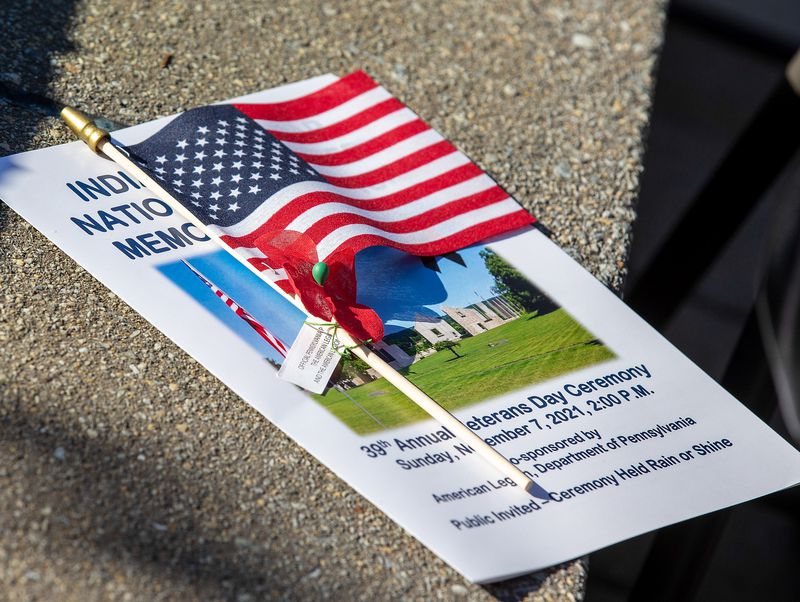 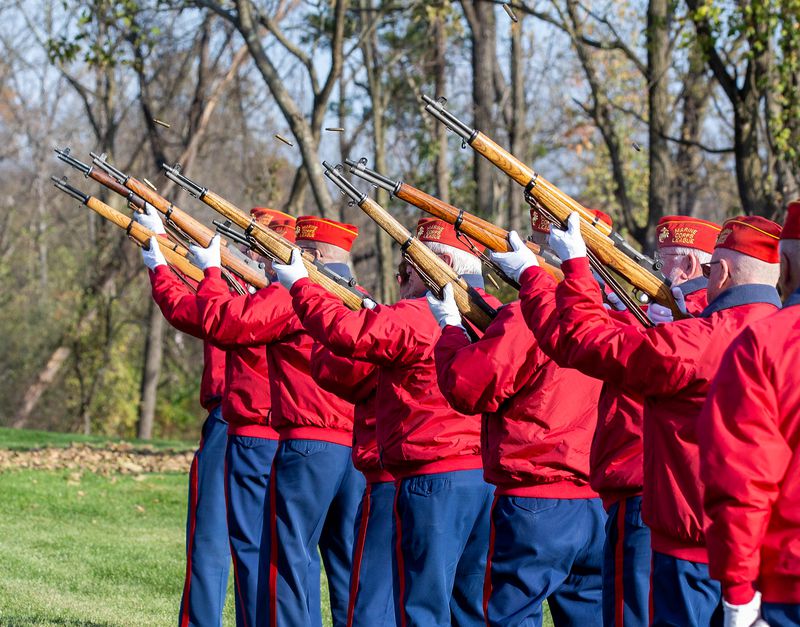 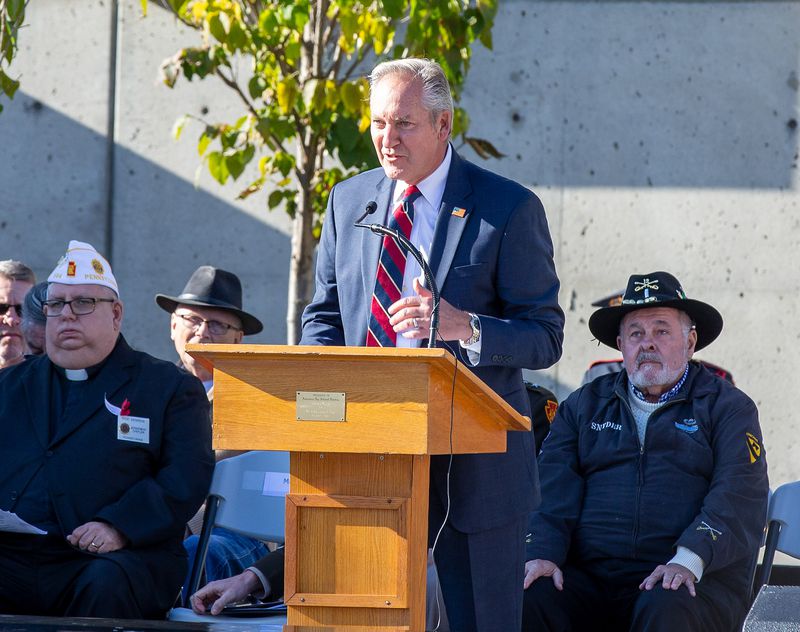 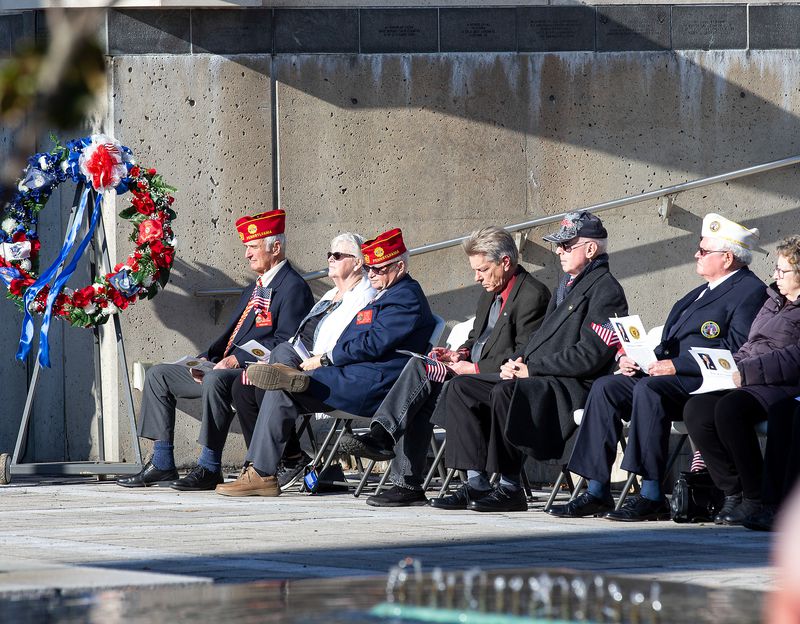 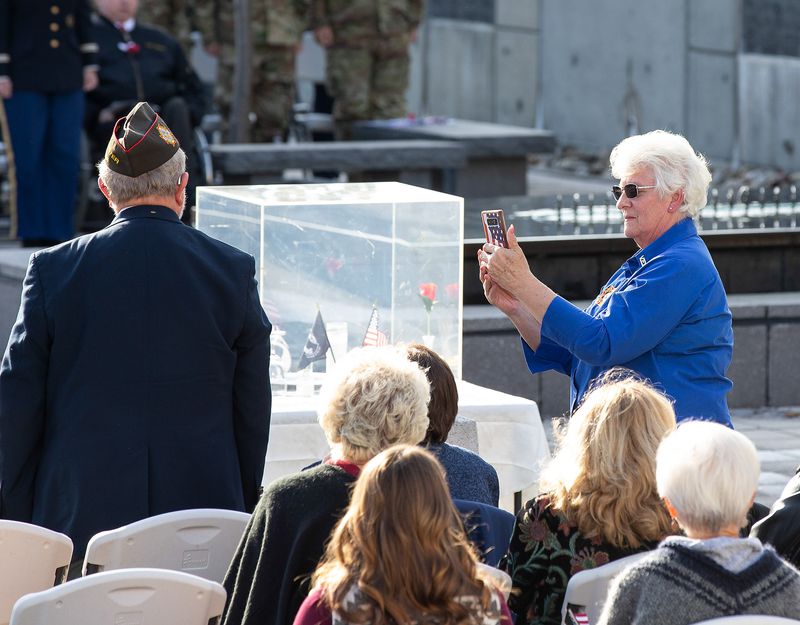 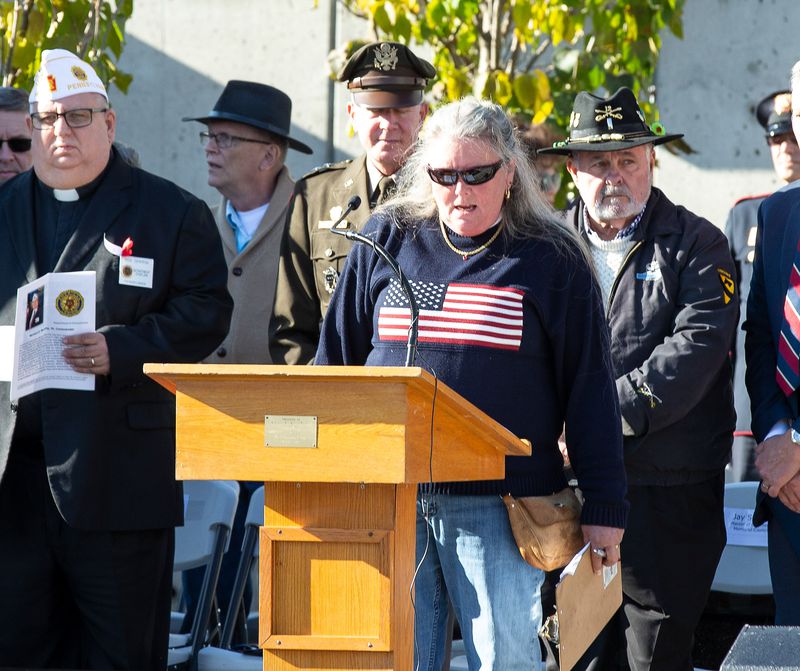 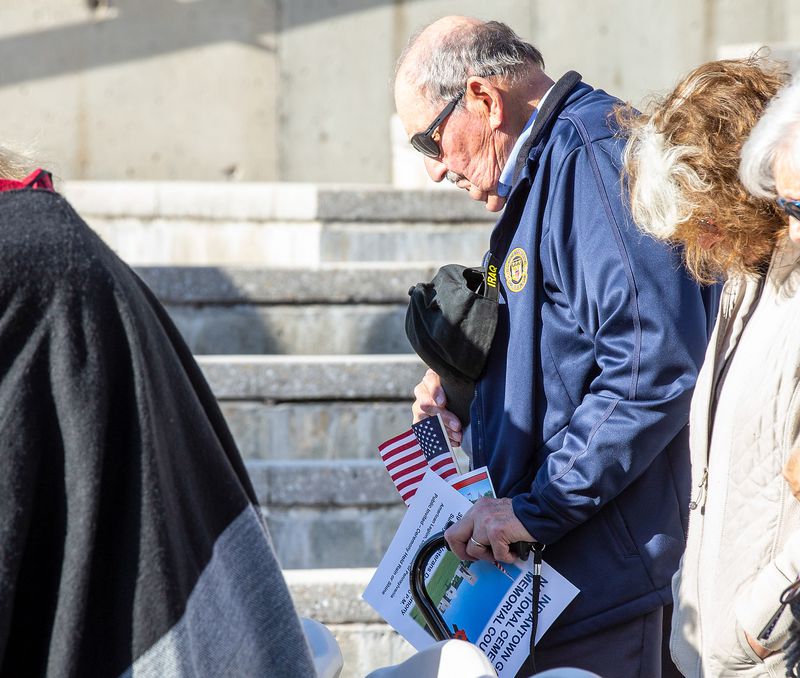 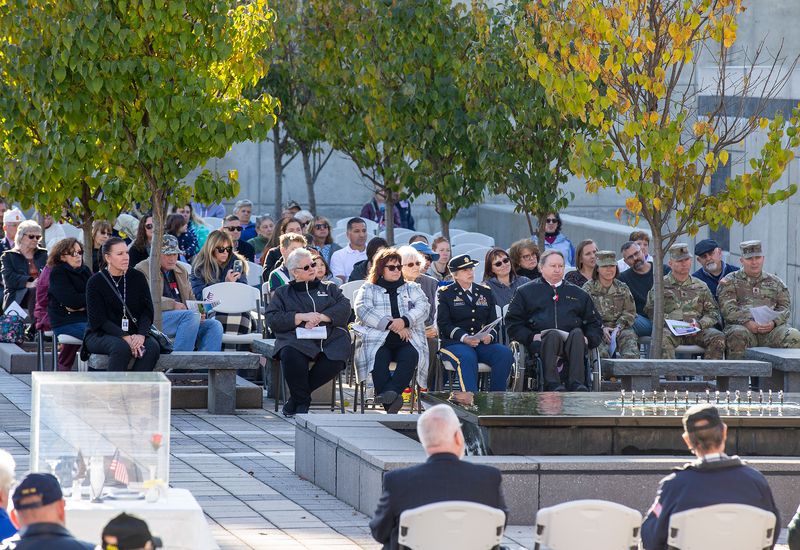 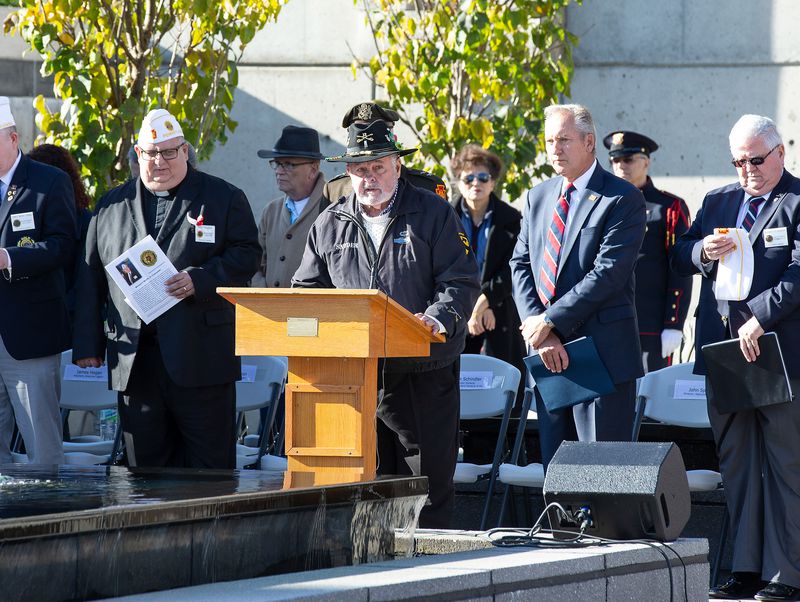 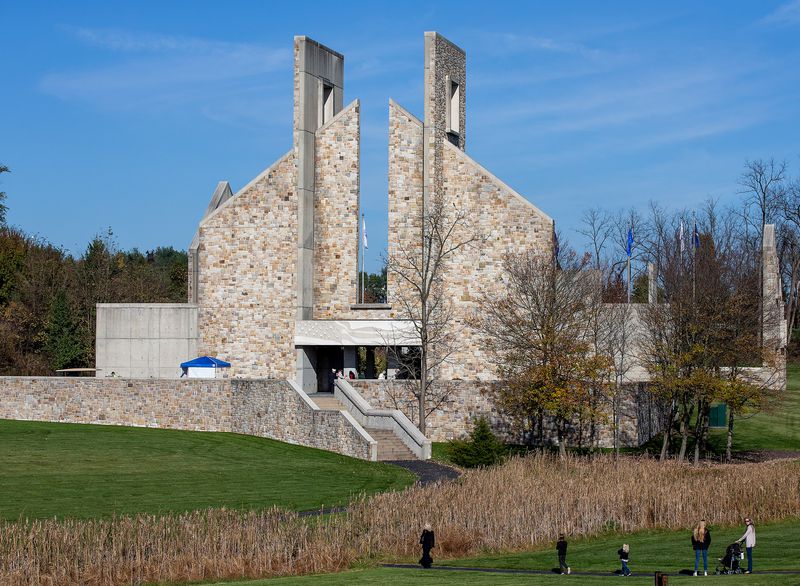 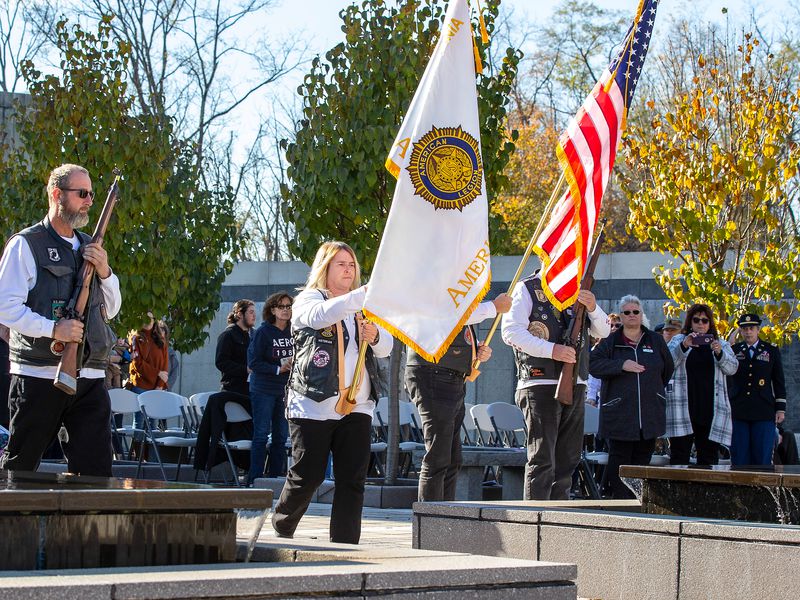 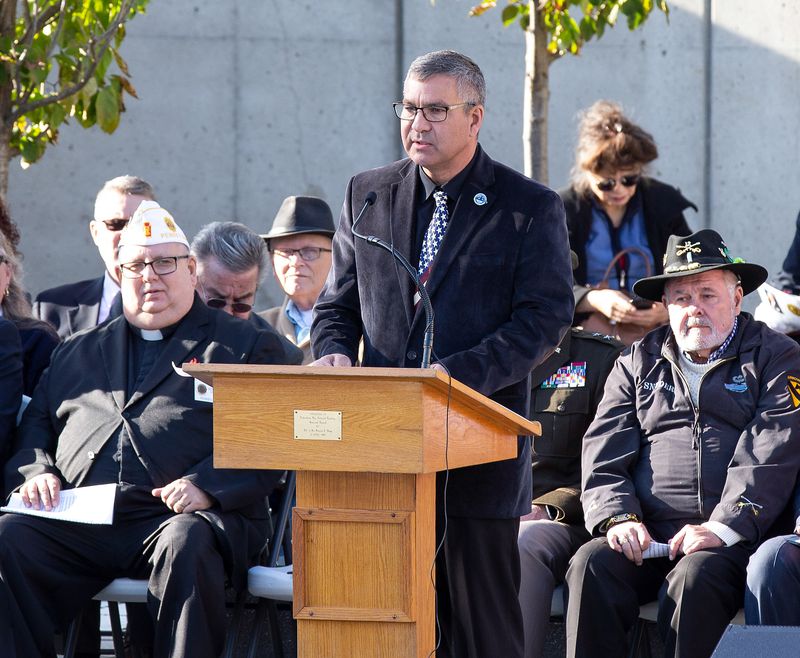 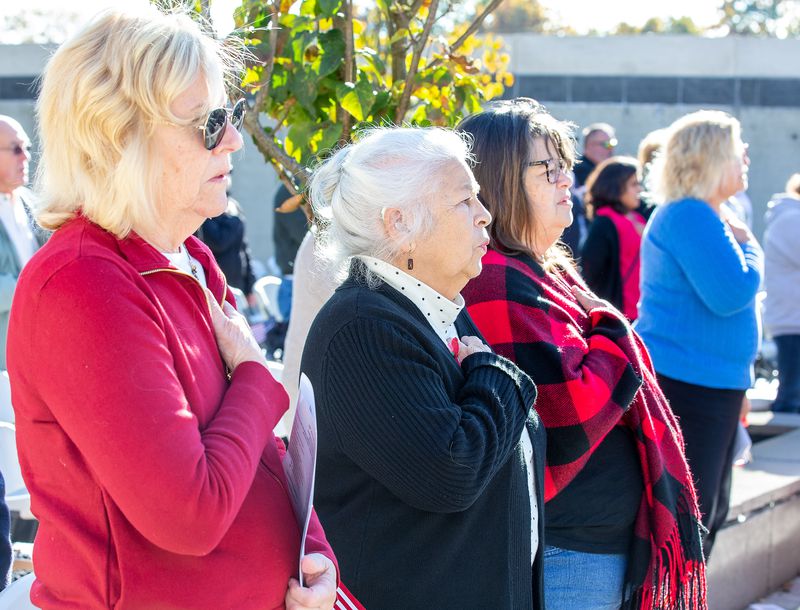 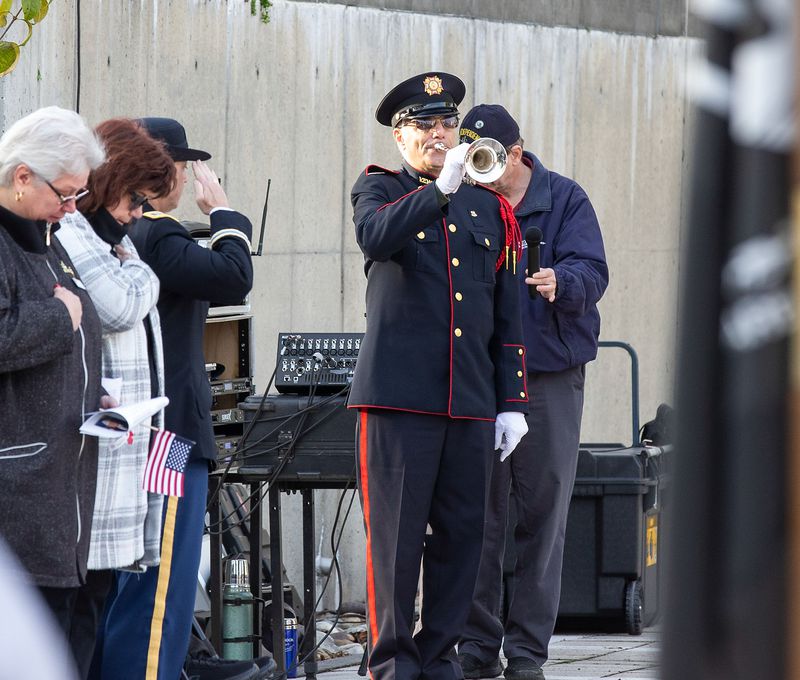 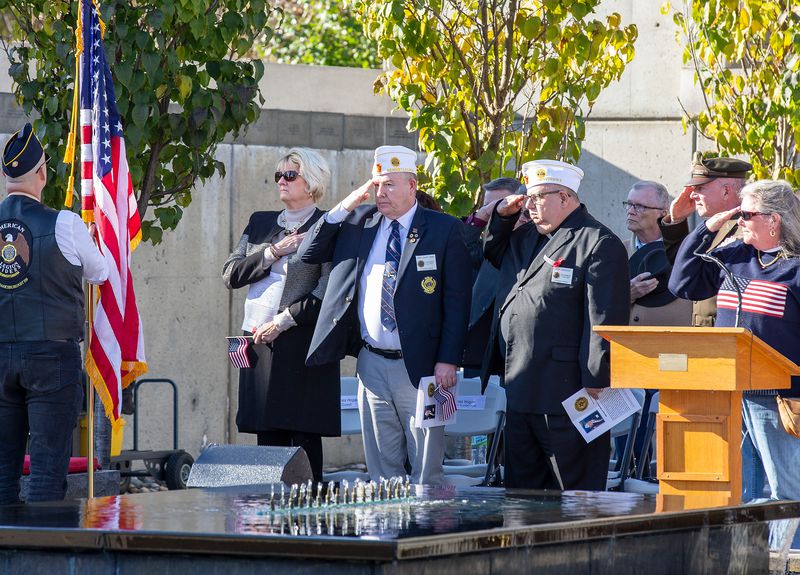 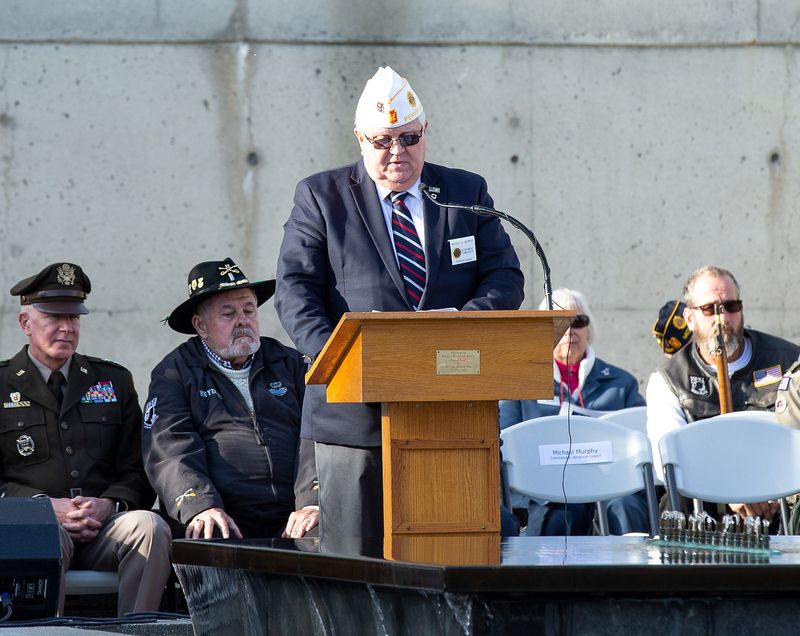 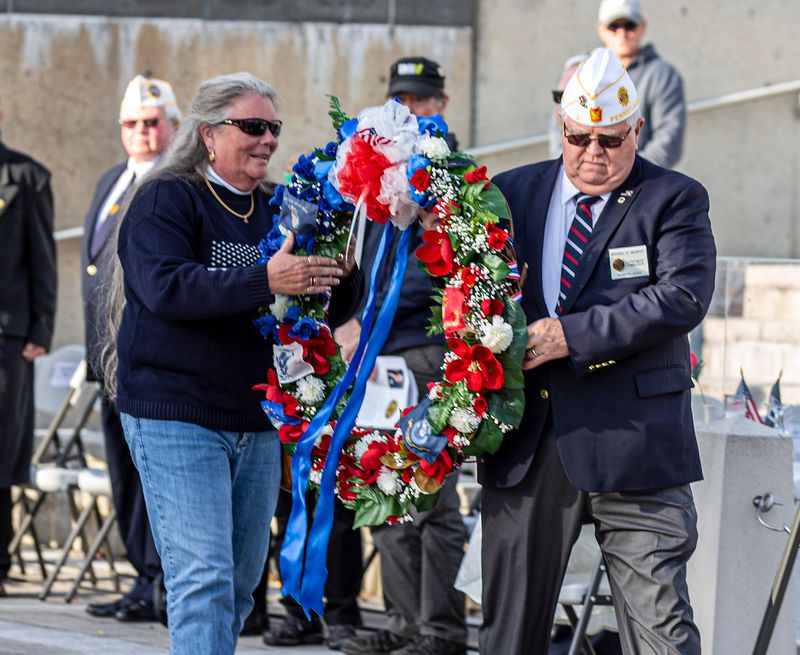 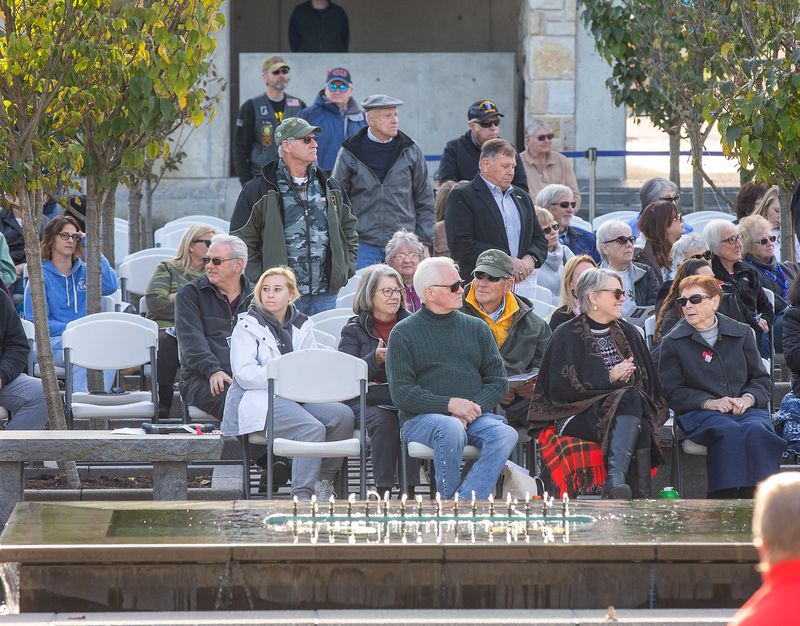 The Holiday Candlelight Service Program is held on the same day as the Wreaths Across America event, and the free Holiday Candlelight Service program starts at 4:30 p.m. in the Pennsylvania Veterans Memorial. Chemical glow sticks are used in this program in place of lighted wax candles and the glow sticks are distributed free of charge to the patrons. During the program, the patrons are invited to step up to the microphone to offer a brief remembrance of a loved one who served in the military. The program also features a Color Guard that perform the flag honors and a local choir that will sing a few appropriate selections. The weather in December is cold and sometimes windy and patrons are advised to dress appropriately as the entire program is outdoors and the Chem-Sticks, though bright and shiny, do not offer any warmth.

REMEMBER the Fallen. . . HONOR those who Serve. . . TEACH our children the value of Freedom.

The Memorial council will assist with the ceremony and wreath placements to Remember and Honor our veterans by laying Remembrance wreaths on the graves of our country’s fallen heroes.

Please help us honor and remember as many fallen heroes as possible by sponsoring remembrance wreaths, volunteering on Wreaths Day, or inviting your family and friends to attend with you. 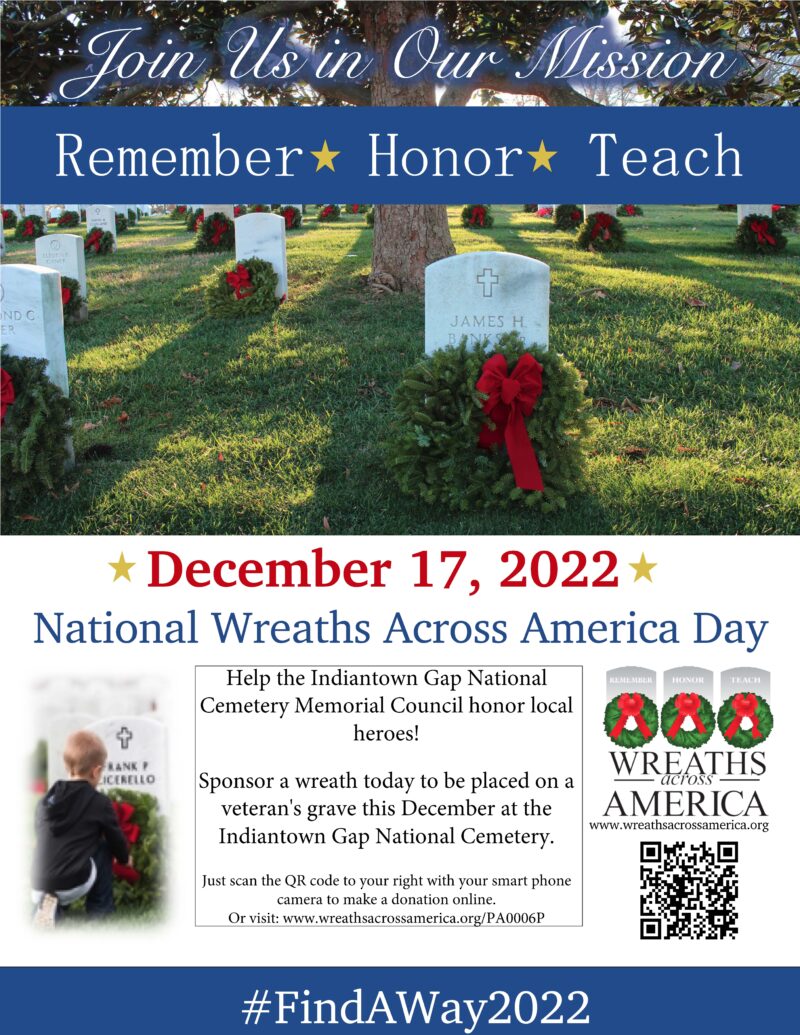 “The Willingness Of Our Veteran’s To Sacrifice For Our Country Has Earned Them Our Lasting Gratitude.”